The Villa of Bilbao as such was officially born on 15th June 1300, when D. Diego López de Haro bestowed the Carta Magna upon it.
Bilbao, like many others cities in the world, is situated on the banks of a river. This river, the Nervión, supplies drinking water as well water for irrigation and inshore fishing, thus offering food as well as water for its inhabitants. In addition, with the passing of time, the estuary has proved to be best means of communication with the exterior.
At the beginning there were two nuclei of population, two settlements of differing character: that of the left bank, or Old Bilbao , who were miners and iron-workers, and that of the right bank, or Old Town, who handled all the comings and goings of mercantile port traffic. Both parts were united by San Anton Bridge, and here there was a harbour just at the point where the high tide reached furthest inland.

Very little is known about the history of the town before the Villa was founded. Some historians have toyed with the idea that Bilbao was once Roman Flaviobriga, on the basis that Roman coins have been found in the estuary, although this teory has not been proved conclusively. What has been proved is that we Bilbainos had contact with the Normans, true masters of the Atlantic link back then in the 9th Century. Perhaps it was they who taught use the arts of sailing and commerce. 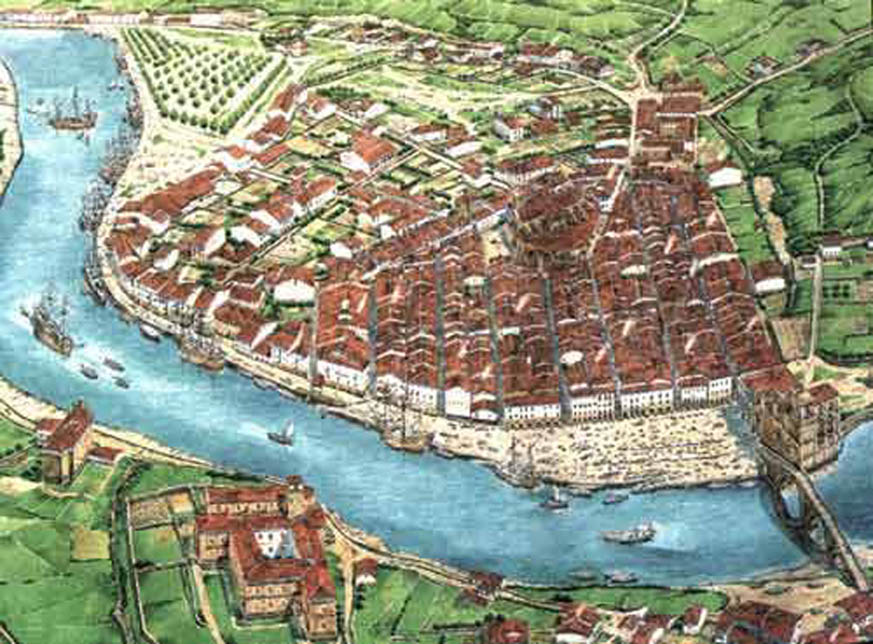 During the 12th and 13th Centuries, Bilbao and Bermeo figured as the two most important comercial ports, giving rise to a rivalry which lasted for centuries. Before the foundation of the Villa, Bilbao had already gained an important economic status, based upon its being the main distribution point of Castillian products bound for the North sea and vice versa. This position as commercial crossroads was decisive in the foundation of the Villa of Bilbao with its own authorities, by-laws (those of Logroño) and municipal charter, thus offering a series of privileges for those who came to live within its walls. Bilbao owned exclusive rights over all navigational and commercial activity in the estuary. Upon this strong basis, institucions and commercial activity flourished alike. Exploiting the raw material to be found in the hearts of the mountains which suround Bilbao, they wrought iron – as both Shakespeare and Tirso de Molina, among others, mentioned. As had always been the tradition, they cut timber from the forest of oak, beech and chestnut, and built boats in which they sailed the seas in search of new business and new commerce.

For three hundred years two institutions dictated the Bilbaino way of life; the Town Hall and the Consulate (1511-1829). Representing the University of maritime contractors and merchants, they controlled all maritime and onshore life, both civil and commercial. This governing body became so important that in the 17th century, Bilbainos had their own Contract House in Brigge, in order to do business in Belgium. The Consulate was dissolved in the 19th century after a Code of Commerce was introduced throughout the State.
So tightly-knit was the collaboration between these institutions that they shared the same building next to the erstwhile church of San Antón.
The integration of Bilbao into the Santiago Way brought new culturaland artistic tendencies into the area, which left its mark on the personality of the city of today. Those pilgrims, travelling along The Way, also brought new sources of income to the Villa.

The history of Bilbao in The Moderm Age is one of the commercial activity, acting as the nexus between the great Europe of the North Atlantic and the interior Kingdom of Castille, as well as being a fundamental connection with Seville and America.
Without doubt the area which changed the whole detiny of Bilbao was the 19th Century. During these one hundred years, Bilbao was designated capital of Vizcaya (1820-1823); industrial development in the metropolitan area grew in leaps and bounds based on the minning and iron and steel industries; the same ocurred in the shipping and railway companys – in the 50 years between 1841 and 1891 over 1,000 kilometres of track was laid – Banks and even the Stock market came into being.